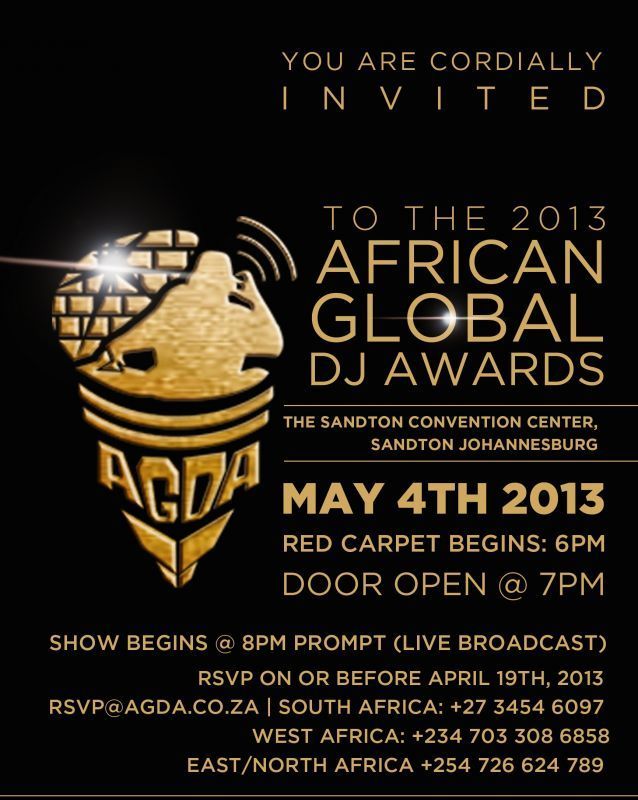 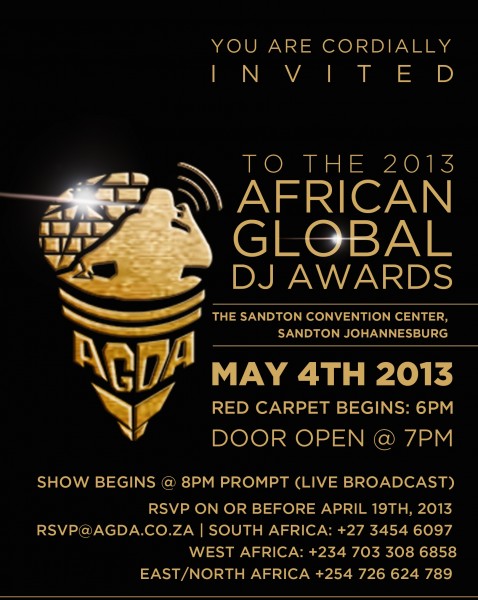 Approximately 3 weeks to the much-awaited 2013 African Global DeeJay Awards and expectations are high from all quarters. Media critics around Africa are already speculating on which DJ would win from which category.

Ghanaian DJs are no strangers to awards as they have won a few before likewise DJs from Kenya, Egypt and Uganda who have had a lot of votes coming in for them via Twitter. Also, serious competition coming from DJs who are in diaspora challenging the local ones for spots in the different categories, so at this point it could be anyone.

There has been very impressive “human traffic” on voting site on a regular basis of people casting their votes for their favourite DJs and also a more impressive activity stream on the social media platform, Twitter.

This is a Fans’ Choice award; fans who listen to these DJs play are the ones who are voting to determine which DJ wins what category.

NOMINEES’ PARTIES
Before the main event that’s holding on the 4th of May at the Sandston Convention Centre Johannesburg, South Africa, there will be nominees’ parties holding in Kenya, Uganda, Nigeria and Ghana where fans can party with nominee DJs and other celebrities. The Nominees’ parties would be at the following cities and locations:

UGANDA
VENOMCLUBKLA, Uganda on the 17th of April. Special appearance by Navio

NAIROBI
Prestige Plaza, Ballroom ,Nairobi Kenya on the 20th of April. Brought to you by MTech in conjunction with Stronghold Entertainment & Statsmedia Production.

ACCRA
XL Lounge, Accra, Ghana on the 26th of April 2013 brought to you by RLG, MTech & Empire Entertainment in conjunction with Stronghold Entertainment & Statsmedia Production.

TO BE A PART OF THE AGDA AWARDS NOMINEES’ PARTY HOLDING IN ANY OF THE CITIES, GO TO THE AGDA AWARDS FACEBOOK FANPAGE – AGDA-FBK, LIKE US AND INBOX US YOUR DETAILS AND CITY YOU RESIDE IN. DOING THIS AUTOMATICALLY EARN YOURSELF AND A VVIP ACCESS AT THE PARTY.

PRE AWARD
There will be a pre-event a day before the award:
WORLD DEEJAY NETWORKING GALA
Date: May 3rd, 2013
Venue: Johannesburg, South Africa
Time: 7PM
After Party: 10PM

This event is strictly by invitation

Vote your favourite DJs so they can take the awards home.