The year 2012 did not go past without some improvement to our music videos. It was a year of immense and intense improvement to our music visuals. The use of the best available equipment and high technology made great impact this year. Back in the days, our music videos were washy and watery, but gladly all these have changed and become a thing of the past. A selection of these 12 videos of 2012 is not solely based on the video quality or the story line; another criterion for this selection is the commercial success with these videos added to the success of the singles or corresponding albums. It is a known fact that a good medium of promoting an album or hit single is shooting a “talk-about-it” video to collaborate and improve the success of the song. In 2012, some videos were reasons why some songs which were previously abandoned or rejected got back into limelight.

Although many videos fall into this category, but of these lot there are 12 videos who are worthy of note and stood out all year round.

Olu Maintain – NAWTI: The “Yahooze” crooner hasn’t disappointed with his videos since inception when he hit with “Yahooze” video. The year did not end without him dropping a mouth watering video to his hit single “Nawti”. The video and song just go in to match. Mr. Olu went all international by bringing several video directors together to shoot at different locations. The video features the international supermodel, Miss Natalie Nunn.

BEZ – STUPID SONG: This is a Clarence Peters creation. The picture quality and concept of the video are synonymous with Clarence’s antecedence. The video concept is in accordance with the concept behind the song. The video coupled the audio and made the song all juicy and gave it an all-year-round success. It is a video with deep international feel. The makeup, location and setting are all first class.

Wizkid – DANCE FOR ME: The video was shot off the E.M.E All-Star album. This is one of the videos that made the album popular. Shot by the video guru Sesan, this is indeed a good one. The video vixens, the choreography, the picture quality and location are all impeccable. The video is one indeed worthy of note.

2face Idibia – IHE NEME: This is another Clarence Peters montage. A distinct story line, with good picture quality; this video came off the “Away And Beyond” album. The comic undertone, W4 cameo, the video vixens, the choreography all made this video unique. It is an incredible one. This is one video that brought attraction and awareness to the album.

Ice Prince – ABOKI: When the single “Aboki” first hit the media, it was criticized as one of Ice Prince’s worst songs ever. A good interpretation of the song by Phil Lee in Los Angeles brought life into the song as it became a hit. The choreography and costume of the video further explained the concept behind the song. This is another video shot at high quality.

Darey – SISI EKO Remix: Shot on the busy Marina Street of Lagos, by Mark Hofmeyr, this video is another worthy of note in 2012. This video did not come short of Darey’s video reputation. He has come a long way with videos and “Sisi Eko” did not fall short of expectations. His comic characters, Ali Baba and Julius Agwu added glamour to the set.

Wande Coal – PRIVATE TRIPS: This video was just perfect for the song. Wande Coal took everyone on private trips with this video. Directed by Sesan, this is another master class. His sexy video vixen made the video a lot more appealing. The costumes, makeup, Porsche ride, location; all top-notch. A lot need not to be said about this video as the visuals adequately speak for it.

Shank – GHETTO: The sepia picture quality of this video is wow. Shot in the slums of Lagos to depict the content and lyrics of the song, this video is one of the best of 2012. It is indeed a natural and quality set. The colour separation and editing is equally admirable. This is another Patrick Elis production.

Naeto C – TONY MONTANA REMIX: This video went well with the hype of the song. The story line, the set, location, makes up, characters, is one to be always remembered. Naeto C even brought a tamed cheetah on set. Incredible!

DavidO – ALL OF YOU: 2012 was obviously a big year for DavidO. Although with several videos in the year, this video stood out of his lot this year. This is another Sesan creation shot after the launch of his debut album. It’s a good one in terms of picture quality, make up, and location. Kudos to Sesan and the HKN gang for this one.

Illbliss – ANAM ACHIKWANU: This is an excellent rap video. It depicts the story line of the song and the boss statue of Illbliss. The power in the rap verses were also depicted in the video of the song. The variations in the effects of the video are world class. The dark scenes were beautifully shot and edited. This is indeed a beautiful rap video by Clarence Peters.

Flavour N’abania – BABY OKU: A top class video shot in Miami, USA by Antwan Smith. This is another big video of the year 2012; a very professional shot. The music video romances the audio, a beautiful love story. The transition from the slow to fast tempo towards the end of the song is top class. This is a role model for videos to come in 2013. 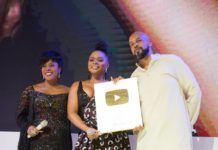 Yemi Alade Receives The Honorary “GOLD PLAY BUTTON” From Youtube, For Garnering Over One Million Subscribers

12 EVENTS THAT MADE 2012 MEMORABLE IN NIGERIA …by Wale Applause