ill-One [real name – Joshua Tochukwu Jakes] grew up with listening to rappers like 50 Cent, Nas, 2pac, Joe Burden, Raskimono, Lucky Dube and Bob Marley; ill-One was in a crew called H2O back then in school, and has been on several rap battle competitions like “Mad Skillz” anchored by M.I and Alabi, “Sprite Triple Slam“, “Rap Titans” in Akure. He has worked with lot of artistes, both up and coming as well as known acts, with credible performances to lot of shows. ill-One is officially signed to Brooklyn World Entertainment [BWE] because of his genuinely way of rapping; industry and music lovers will still remember him on “Oleku Freestyle [a Ice Prince cover]“. Now, he’s out with another cover, and this time it’s on W4‘s “Kontrol“. | ENJOY!!! 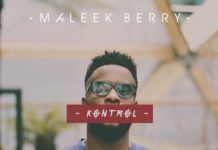 Lioness & Emma Nyra – ANYTHING FOR LOVE (prod. by Selebobo)